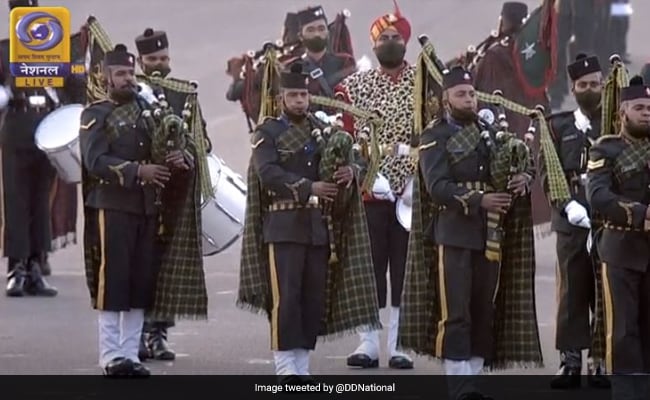 The ceremonial parade at the heavily curtailed 72nd Republic Day celebrations at Rajpath this year ended at the National Stadium, the venue where the very first grand event was held on January 26, 1950 to declare India’s transition from a Dominion to a Republic. The maiden celebrations marking the birth of the Republic of India was not held on Rajpath, the historical avenue that has over time become synonymous with the ceremony, but it was an amphitheatre named after an erstwhile Viceroy that became the venue for the festivities after the country got its first president.

On Tuesday, only 25,000 spectators compared to the 1.25 lakh last year watched the event from the sidelines of the boulevard, as the parade wended its way to culminate at the National Stadium instead of the regular end point at the Red Fort, in view of the COVID-19 pandemic. It was thus the life of a nation as a republic coming full circle, spanning 71 years, as the ceremonial parade ended at the stadium, which was known as the Irwin Amphitheatre when the first Republic Day celebrations were hosted there in 1950.

According to Google Arts and Culture website, the stadium was built in 1933 as a gift to Delhi from the Maharaja of Bhavnagar and named after former Viceroy of India, Lord Irwin, who had inaugurated the new British capital ”New Delhi” in February 1931 during his tenure. Designed by Robert Torr Russell, also the architect of the iconic Connaught Place, the amphitheatre was renamed to the National Stadium in 1951 just before the Asian Games was hosted. In 2002, Major Dhyan Chand’s name was affixed in honour of the hockey legend.

On the historic day of January 26, 1950, hours before the celebrations at the Irwin Amphitheatre, India, after having thrown off the British colonial rulers in 1947, assumed the mantle of a “Sovereign Democratic Republic”.

“At the most solemn ceremony, held in the brilliantly lit and high domes of Durbar Hall at Government House, India was declared a Sovereign Democratic Republic exactly at 18 minutes past 10 on the morning of Thursday, January 26, 1950. Six minutes later, Dr Rajendra Prasad was sworn in as president,” reported Fauji Akhbar (now Sainik Samachar) in its article titled ”Birth of a Republic” on February 4, the same year.

“The birth of Indian Republic and the installation of its first president were announced by a salute of 21 guns shortly after 10:30 am,” reported the publication. In an impressive swearing-in ceremony, the retiring Governor-general, C Rajagopalachari, read out the proclamation of the Republic of “India, that is, Bharat”.

“… And whereas it has been declared by the said Constitution that India, that is, Bharat, shall be a Union of States comprising within the Union the territories, which were hitherto the Governor’s provinces, the Indian states and the Chief Commissioners’ provinces,” the military journal quoted the last Governor-General’s speech.

The president then took the oath and made a brief speech, first in Hindi and then in English. “Today, for the first time in our long and chequered history we find the whole of this vast land from Kashmir in the north to Cape Comorin in the South, from Kathiawad and Kutch in the west to Coconada and Kamrup in the east, brought together under the jurisdiction of one Constitution and one Union, which takes over the responsibility for the welfare of more than 320 million men and women that inhabit it,” President Prasad said in his historic speech.

Though India had been used to pomp and pageantry having witnessed three imperial durbars before Independence, but the ceremonial splendour of that occasion was very special as the president’s procession wound through the Delhi streets in a symbolic gesture of coming-of-age of a nation.
The over 100-year-old journal had said, “The president drove out of the Government House (now Rastrapati Bhawan) in state exactly at 2:30 pm in a 35-year-old coach specially renovated for the occasion bearing the new emblem of Asoka’s capital and drawn by six sturdy Australian horses, at a slow trot, escorted by the president’s bodyguard.”

And, as the procession made its way through the Irwin Amphitheatre, chants of “jai” echoed through the streets with cheers of people perched on trees and building roofs and every possible vantage point. The people’s president as he would come to be known as later in his office, responded to the joyous greetings of the gathered masses with warmth and folded hands.

“The drive ended exactly at 3:45 pm at the Irwin Amphitheatre where 3,000 officers and men of the three Armed Services of India and the police with massed bands had taken positions for the ceremonial parade,” reported the article. In what would serve as the precursor to the grand festivities in later decades on the Rajpath, the Amphitheatre housing 15,000 people witnessed one of the most magnificent military parades in India’s recent history.

The venue was beautifully decked up and the stands were filled with people in their sartorial best. Seven massed bands, representing the three armed forces and the police regaled the spectators, while units of the forces and native contingents and regiments added colour and precision to the solemn occasion.

But perhaps the greatest draw of the day was the feu de joie (”running fire of guns”) accompanied by the National Anthem as guns thundered in salute to the nation’s first president. While the venue for Republic Day celebrations shifted to Rajpath from 1951 onwards, iconic monochrome images of the late Homai Vyarawalla, India’s celebrated first woman photojournalist, of January 26, 1950 has also etched that day in history forever.

The Beating Retreat ceremony on Friday, another traditional event of the country held every year on January 29, marks the official closure of the Republic Day celebrations.

Microsoft Teams May Receive Improvements to Cut Down on RAM, CPU Usage

All Central Government Employees To Attend Office On Working Days

Case Against 6 UP Cops For Alleged Extortion, Corruption