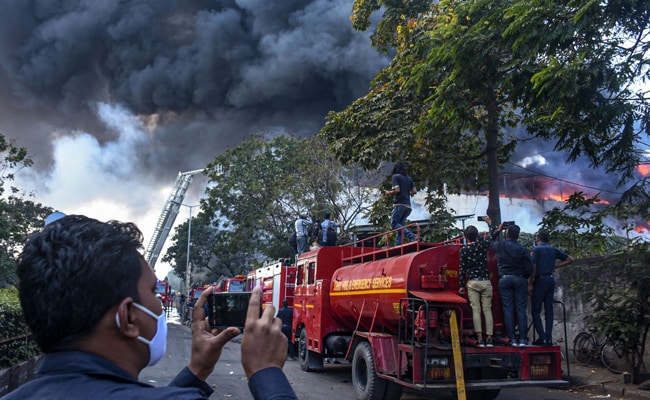 The fire brigade rushed 10 fire tenders to the spot to control the blaze.

The chief fire officer of the civic body was among six persons injured in a major fire that broke out at a textile dyeing mill in Surat city of Gujarat on Friday, an official said.

The fire started at the Shree Labdhi Prints factory located near Bhawani circle on Ashwani Kumar Road around 3 pm and was brought under control around 6 pm, said Deputy Municipal Commissioner, Fire and Emergency, N V Upadhyay.

The fire brigade rushed 10 fire tenders to the spot to control the blaze.

Around 35 persons were working in the mill when the fire broke out, said Upadhyay.

“While some workers came out safely on their own, fire brigade personnel rescued around 20 others. Five of them who had sustained minor injuries were admitted to a nearby hospital,” the official said.

Chief Fire Officer Basant Parikh, who suffered 12 per cent burn injuries during the dousing operation, was also admitted to the hospital, he added.

Nobody sustained serious injuries and all six were out of danger, the deputy commissioner added.

It was suspected that polyester fabric may have caught fire due to a spark from a machine but the exact cause was yet to be ascertained, Mr Upadhyay said.

A representative of the factory had said earlier that a spark from an electric motor apparently triggered the blaze.

A worker who managed to escape from the building in time told reporters that all his colleagues came out safely either by using staircase or by climbing down the trees adjacent to windows.

“Shine The Light…”: Rescuers Race To Save 39 From Uttarakhand Tunnel