Police said no one was injured in the blast

A “very low-intensity” IED (improvised explosive device) was detonated near the Israeli embassy in the heart of central Delhi on Friday evening, the police have said, adding that no injuries or property damage, apart from shattered windscreens of nearby cars, had been reported.

“A very low intensity improvised device went off… No injury to any person was reported… nor was there any damage to property, except the glass panes of three vehicles parked nearby,” Anil Mittal, a Delhi Police spokesperson, was quoted by news agency PTI.

The blast took place 1.4 kilometres from Vijaya Chowk, where President Ram Nath Kovind, Prime Minister Narendra Modi and other senior members of the government had gathered, amid extremely heavy security, for the Beating Retreat ceremony that follows the Republic Day parade.

Home Minister Amit Shah has been briefed on the situation.

Foreign Minister S Jaishankar has tweeted to say he has spoken to his Israeli counterpart, Gabi Ashkenazi, and assured him of “the fullest protection for the Embassy and diplomats”.

“Spoke just now to Israeli Foreign Minister Gabi Ashkenazi about the explosion outside the Israeli Embassy. We take this very seriously. Assured him of the fullest protection for the Embassy and Israeli diplomats. Matter is under investigation and no effort will be spared to find the culprits,” he said.

Spoke just now to Israeli FM @Gabi_Ashkenazi about the explosion outside the Israeli Embassy. We take this very seriously. Assured him of the fullest protection for the Embassy and Israeli diplomats. Matter is under investigation and no effort will be spared to find the culprits.

A statement from the Israeli government confirmed no injuries or damage to its property.

“An explosion occurred a short while ago, close to the Israeli Embassy in New Delhi. There are no casualties and no harm was done to the building. All diplomats and staff are safe,” a statement said.

As part of the SOP (standard operating procedure) in such situations, an alert has been issued at all airports, important installations and government buildings in the country, and “enhanced security measures have been put in place”, the CISF (Central Industrial Security Force) has said.

Police sources said the explosive, which an initial probe suggests had ball bearings as part of the IED’s makeup, had been wrapped up in a plastic bag and left on the pavement outside a nearby residence that is just metres away from the embassy.

The entire area – the embassy is located on Dr APJ Abdul Kalam Road – has been cordoned off and senior Delhi Police officers, as well as those from the Special Cell and other intelligence agencies, have reached the spot.

Visuals from the area showed a heavy deployment of police and security personnel standing outside the embassy, with yellow Delhi Police barricades set up at both ends of the road. 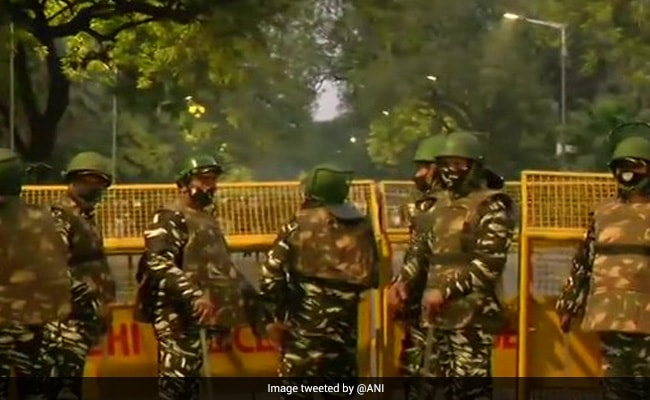 The blast comes days after Home Minister Amit Shah met with the Delhi Police Commissioner and the heads of intelligence agencies to discuss security in the national capital.

This was in the aftermath of violence on Republic Day between police and groups of farmers protesting the agriculture laws.

After that meeting additional paramilitary forces were positioned in the city. News agency ANI quoted an unnamed senior official as saying 15 companies of paramilitary forces – including 10 from the CRPF (Central Reserve Police Force) had been sent in and five more were on standby.

This is the second blast to take place involving the Israel embassy; the first was in February 2012, when a bike-borne attacker planted a ‘sticky bomb’ on an embassy vehicle at a traffic junction.

That today’s blast, albeit a minor one, took place despite increased security in the national capital and after an earlier such incident involving the Israeli embassy, is something that security and intelligence agencies will be investigating very closely.

The Sandman Netflix Adaptation Ropes in Game of Thrones Stars

No Promise Was Made On Chief Minister’s Post In Maharashtra: Amit Shah