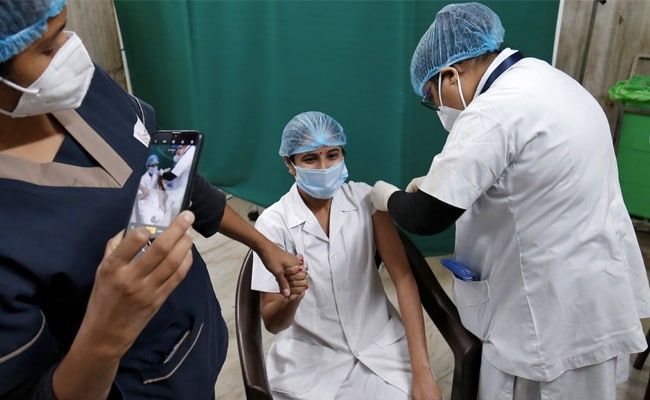 COVID-19: Over 33 lakh healthcare workers has been vaccinated across India so far. (File)

It is the third vaccine approved for use in the 27-nation EU, after rival shots produced by Pfizer-BioNTech and Moderna, AFP reported.

Here are the live updates:

Brazil has the world’s second-highest COVID-19 death count, after the United States.

A furious row over shortages of AstraZeneca’s Covid-19 vaccine has risked stoking conflict with the UK just weeks after London and Brussels sealed a Brexit trade agreement.

The EU had warned it would invoke Article 16 — overriding part of a deal with London allowing the free-flow of goods over the Irish border — but backed down after criticism from the UK and Ireland.

“The Commission will ensure that the Ireland / Northern Ireland Protocol is unaffected,” the EU Commissioner said in a statement late Friday.

The European scheme to monitor and bar exports of vaccines produced in EU plants has also been criticised by the World Health Organization.

The WHO said the move was part of a “very worrying trend” that could jeopardise the global supply chain for vaccines.

Although the EU has rowed back from the Article 16 threat, a Commission statement said if there were vaccines circumventing the European system, “the EU will consider using all the instruments at its disposal”.

The EU earlier justified the “safeguard measure” as an attempt to keep member states’ vaccine rollouts on track.

And Health Commissioner Stella Kyriakides insisted: “We are not protecting ourselves against any specific country. And we’re not in competition or in a race against any country.”

Five dead in helicopter accident in Cuba: official
Five people died in Cuba on Friday when their helicopter crashed on its way from the province of Holguin to Guantanamo in the east of the island, the armed forces ministry announced.

The helicopter “crashed against a hill” and “the five people on board died,” the ministry said in a statement released by state media.

The ministry has set up a commission to investigate what caused the accident, according to the statement. It gave no other details, including the identities of the victims.

The last serious air accident in Cuba occurred in May 2018, when a plane crashed shortly after take-off from Havana airport, killing 112 people, with only one passenger surviving.

An investigation found errors in the calculations of the aircraft’s weight and center of gravity.

Travellers to Canada will have to quarantine in hotels at their own expense and airlines are suspending flights to southern destinations, Prime Minister Justin Trudeau announced Friday, further tightening restrictions to slow Covid-19’s spread.

New arrivals will have to pay to quarantine in hotels for up to three days under strict supervision, AFP reported.

Redmi 9 Power Gets a Higher RAM Variant in India