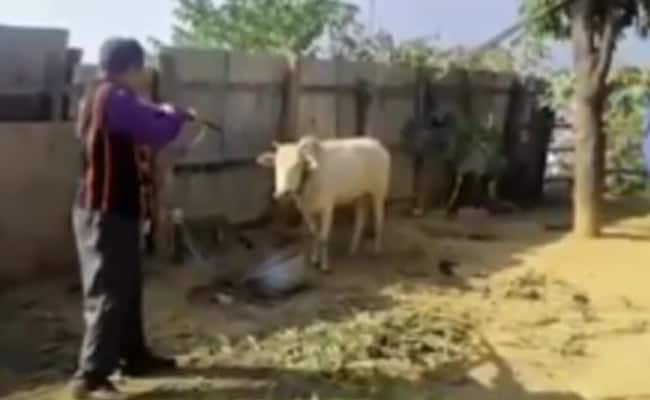 A man in Manipur shoots a tethered cow in the head as an onlooker records the act on a mobile camera, a disturbing video – widely shared on social media – shows. A case was registered on Wednesday against the man after the non-profit People For Ethical Treatment of Animals or PETA wrote a letter to the police seeking action under the law that deals with cruelty against animals.

The incident took place in Ukhrul district, 80 kilometres from the state capital Imphal.

The viral clip shows the animal collapsing and then writhing in pain while its attacker poses for the camera.

According to sources, the animal rights group worked closely with the Additional Superintendent of Police, Ukhrul, Saujanya Singh, for the registration of the case.

“PETA India commends the efforts of the Manipur police and thanks them for their clear message that cruelty to animals will not be tolerated,” said PETA India’s Emergency Response Team Associate Manager, Meet Ashar.

“The trauma this cow must have gone through is hard to imagine. Since people who are cruel to animals often move on to harming humans, it is imperative for the public to report cases of cruelty to animals such as this one for society’s safety,” he added.

Research shows people who commit acts of cruelty against animals are often repeat offenders, who move on to hurt other animals or humans.

In a study of domestic violence victims, 60 percent of women said that their abusive partners had harmed or killed their dogs or other animals.