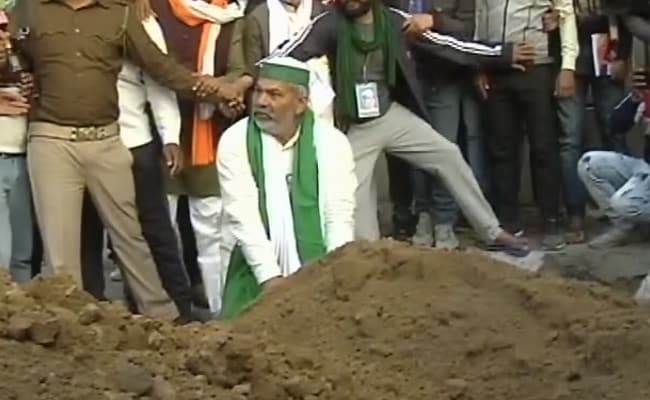 Rakesh Tikait took a spade and got down to work.

Spikes on the roads, cement walls and multiple barricades at a farmer protest site at the Ghazipur border between Delhi and Uttar Pradesh have drawn international attention over the past few days. The protesting farmers today added flowers to the picture.

A day before a planned nationwide “chakka jam” or road blockade in support of the farmers’ agitation, farmer leader Rakesh Tikait sought to change the optics by planting flowers alongside the heavy barricading at Ghazipur, delivering a pointed message.

At the same spot, there were spikes and nails till yesterday to prevent farmers from forcing their way into Delhi, like on January 26, when a Republic Day tractor rally saw chaos and clashes between protesters and the police in the capital.

Mr Tikait, one of the organisers of Saturday’s blockade, announced after a meeting that farmers of Uttar Pradesh would “take a break” and would not participate in the three-hour “chakka jam”. He cited sugarcane harvesting and the non-stop protests since November-end.

Soon after, a truck unloaded a mound of soil near the barricades. The flowers arrived separately.

Mr Tikait took a spade and got down to work.

It was his tearful appeal that recharged the farmer protests after a huge backlash over the Republic Day violence.

Since the violence, several cases have been filed and a few protesters accused of attacking policemen and vandalizing the Red Fort complex are missing.

The Delhi Police defended the excessive border fortification – compared by opposition leaders to the India-Pakistan border – saying it was necessary to prevent a repeat of the Republic Day chaos.

The government hit back with a warning against the “temptation of sensationalist social media hashtags and comments” and said the protests were by a “very small section of farmers” who were opposing laws meant as reforms and enacted after “full debate in parliament”.

The farmers want the laws withdrawn as they believe they will take away their guaranteed earnings and leave them at the mercy of corporates.

She Strived For An Indian Voice On Climate Change: Disha Ravi’s Friend

Proof That Protest Not Limited To Punjab, Haryana: Farmers On “Rail Roko”