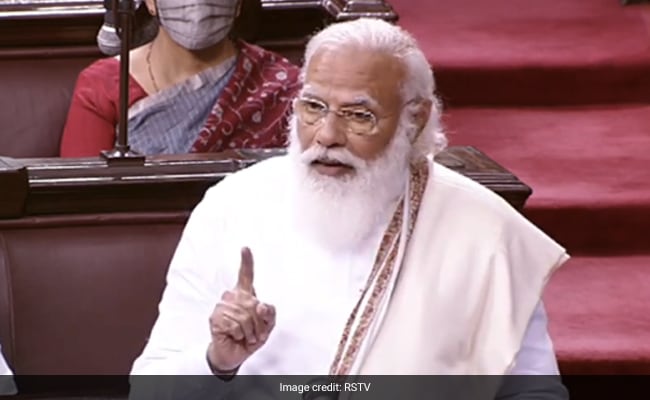 PM Modi was speaking in the Rajya Sabha, replying to the Presidential address.

Playing on the term “foreign direct investment or FDI”, Prime Minister Narendra Modi today said the country needs to be cautioned against deleterious influences from abroad which he referred to as “foreign destructive ideology”. He used the term in the context of the ongoing farmers’ agitation that has, of late, received support from several global celebrities such as pop artiste Rihanna and climate activist Great Thunberg.

The Prime Minister today reiterated his invitation for talks with the protesters. “This country is proud of Sikhs…What have the Sikhs not done for the nation?” he said referring to the community that is now seen as leading the protest mostly. He, however, added that one must be aware of a “new category” of people: “Andolanjeevi,” roughly translated as the “agitation being”.

“We are all ready to meet and talk. I put forth the invitation today in the House,” PM Modi said in the Rajya Sabha today while replying to the Presidential address. “MSP (minimum support price) has been around, MSP is still around, MSP will remain,” he said addressing one of the biggest issues raised by the protesting farmers who fear the new laws will eventually dismantle the MSP system.

Thousands of farmers, especially from Punjab, Haryana, and Uttar Pradesh have camped outside Delhi over the past two months and more, demanding the repeal of three farm laws that the government claims will reform the sector. The farmers, however, feel these will lead them into a disadvantageous position.

The ongoing confrontation between the protesters and the government has in recent days garnered attention abroad, with even the United Nations stating the need for peaceful negotiations and emphasising the farmers’ right to protest.

In fact, India has asked microblogging platform Twitter to remove over 1,300 accounts for allegedly spreading misinformation and provocative content around farmers’ protests. It has said that these handles have Pakistani and Khalistani users, according to official sources.

The move comes days after Swedish climate activist Greta Thunberg last week tweeted a “toolkit” in the context of the farmer protest. This document, according to the police, aimed to spread disaffection and ill-will against the government of India and sought to create disharmony among various social, religious, and cultural groups.

Several political leaders supporting the Centre have earlier passed jibes at the protesters, calling them terrorists, Sikh separatists, and Pakistan- or China-backed.

The Prime Minister’s remarks today in Parliament are likely to be viewed as part of that continuum.

“Today a new foreign destructive ideology has emerged…the country must be made aware of this ideology,” he said.