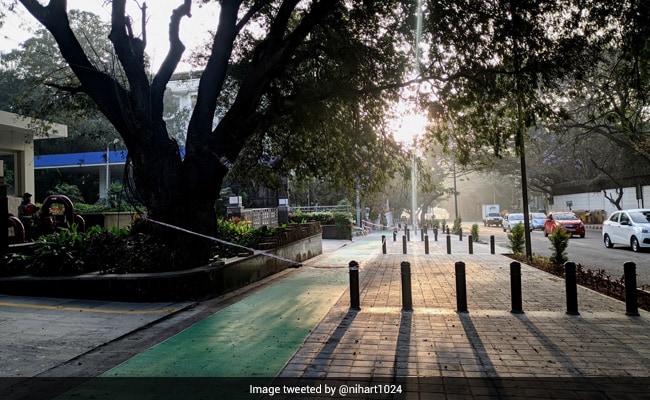 The stretch on the Race Course Road is part of a larger cycling circuit.

Cycling enthusiasts are flocking the new, greener route on the Race Course Road in Karnataka’s Bengaluru.

On January 30, Chief Minister BS Yeddyurappa inaugurated the new green tracks at the city’s Central Business District area which have been developed by the Bangalore Smart City Ltd.

17-year-old Nihar Thakkar, resident of the city and a cycle enthusiast, posted a video on Twitter, which has grabbed eyeballs with over 1,30,000 views.

Love this section of Old Airport Road which has a beautiful tree canopy ???????? pic.twitter.com/jjNynLicvp

“It is very encouraging to see that the city has started building infrastructure that makes it safer to cycle and walk. I think it’s a great start and hope that everyone works together to shift to sustainable modes of transport. This will help reduce pollution, make our city safer and more livable for everyone,” Nihar told NDTV.

The stretch on the Race Course Road is part of a larger cycling circuit, under the Bengaluru Smart City project. Along with cycling tracks, creation of smart footpaths are also part of the project.

The number of cyclists in the city has also increased significantly after the COVID-19 lockdown.

Daily cycle commuters have welcomed this initiative. However, many cyclists feel a lot more needs to be done to ensure better implementation of the project, and to avoid pedestrians blocking spaces on these tracks.

“It’s a very good decision and helpful for people like us. Cyclists won’t be disturbed by the traffic now,” Satya Naryana, an office assistant told NDTV.

Health Workers Who Miss Vaccination To Be In Age-Specific Batches: Centre

Asus ROG Phone 5 Tipped to Launch in India in March