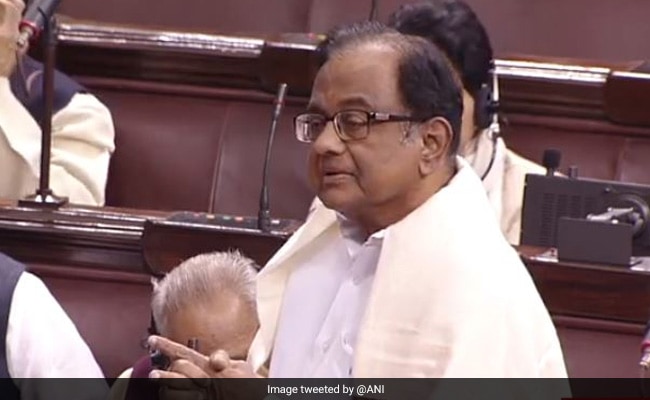 Opposition parties in the Rajya Sabha on Thursday termed the union budget for 2021-22 as one “for the rich and by the rich” that reflected a “painful story” of the country and bankruptcy of its economy.

Various parties including the Congress, TMC, SP and left parties hit out at the government over the state of the economy and rising unemployment and alleged that the Modi dispensation was out to sell the country’s assets.

Participating in the debate on the union budget, Congress leader P Chidambaram tore into the government for presenting a “disappointing” budget and described it as a “budget for the rich, of the rich and by the rich” meant for only “one per cent of India”s population controlling 73 per cent wealth”.

Rejecting the budget, the former finance minister hit out at the ruling dispensation, charging it with “incompetent economic management”.

“Two years of slowdown before the coronavirus is a reality,” he said.

“Mark my words, the growth projections will fall short by the end of 2021,” the former finance minister asserted.

“The Budget has shown certain dreams that even the Economic Survey has not talked about them,” he said.

He further said the Economic Survey pegged the country”s growth at 11 per cent for the 2021-22 fiscal but the Budget document projected more than this at 14.4 per cent.

“On January 4, the World Bank global report estimated India”s GDP to plunge 9.6 per cent. However, a spokesperson of the government says such a report should not be relied upon. Till date, we don”t know about the revised estimate. How do we reject the World Bank Report and how do we trust your figures,” he asked.

Ignoring these reports, the government is showing the dream of “Atmanirbhar Bharat” to everyone, he added.

On labour laws, the Trinamool Congress leader said the six labour laws have been amended for the benefit of corporates and termed it as an “anti-labour step”.

“The hire and fire policy shall prevail upon the working conditions of the workers. The working hours will be extended from 8 hours to 12 hours at the dictates of corporates. This is going to happen when the labour laws will be implemented,” Ray said, asking, “Who will give the consent? If employees don”t give, they will lose their jobs”.

There is a “vast army” of unemployed people and it will lead to a law and order problem in the coming days, he warned.

CPI (M) member Elamaram Kareem said the Union Budget is very disappointing and it has failed miserably in addressing the present situation.

He said the Budget is far away from the ground realities and is “cruelly insensitive” to the sufferings of the toiling mass. “This budget looks like a sales advertisement. Everything is for sale here,” he alleged.

Manoj Jha of RJD said earlier it used to be a budget for general people but since the 1990s it has become “khaas” (special) budget. He said the budget has failed to address the current challenges.

Samajwadi Party (SP) leader Vishambhar Prasad Nishad said he does not think that the government”s plan about doubling the income of farmers will succeed and pointed out that there is no provision for the farm-allied sectors in the budget.

“The budget is a bundle of untrue bluffs,” he said.

The budget will increase the disparity between the rich and the poor and it is very disappointing for farmers, wage-earners and small traders, Nishad said.

Arun Singh (BJP) lauded Finance Minister Nirmala Sitharaman for not imposing any additional taxes despite the adverse circumstances. He said not even a rupee in tax was levied in the budget.

Singh accused the former UPA regime of corruption and mismanagement.

During the UPA regime, he said, one minister used to be part of 26-27 groups but decisions were taken by an “invisible power”.

BJD member Sujeet Kumar lauded the growth focus of the Budget, saying increased capital expenditure for improving the physical infrastructure, higher priority to health and drinking water, and steps to boost start-up ecosystem in the country were praiseworthy initiatives that will help the country march towards prosperity.

He, however, flagged the marginal hike in the defense Budget, at a time when Pakistan and China were raising their allocations on defense. He also expressed disappointment at reduced allocation for the education sector.

TKS Elangovan of DMK said the Budget had not made adequate provisions to address the plight of daily wagers, who were significantly impacted by the pandemic.

17 Arrested For Vandalising Property On Valentine’s Day In Bhopal

Body Of 4-Year-Old Found In Greater Noida, Over 20 Days After He Was Kidnapped: Police