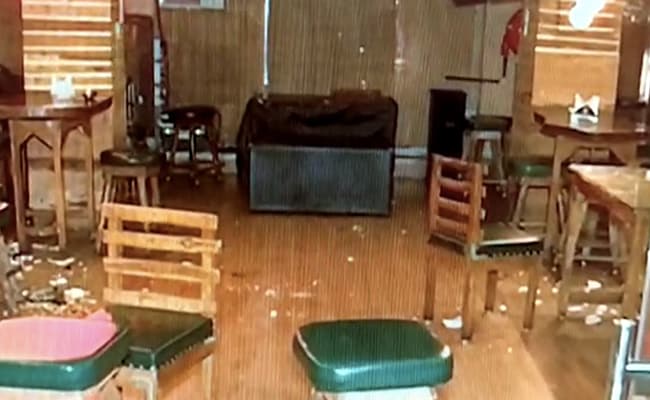 A restaurant was vandalised on Valentine’s Day in Bhopal

A restaurant in Bhopal was vandalised when people were out eating on Valentine’s Day on Sunday. Some people who identified themselves as Shiv Sena activists entered the restaurant in the city’s Arera Colony and vandalised the property, the police said.

CCTV and mobile visuals of the ruckus created by the group of men were shared widely on social media. Tableware like plates and cups are seen on the restaurant floor, broken into pieces.

A former BJP MLA has been arrested in another case of vandalism in Bhopal on Valentine’s Day, news agency PTI reported quoting the city police. In all, 17 people were arrested from the two incidents in the city, the police said.

“Our teams embarked on a halla bol on Sunday following a call by ex-BJP MLA Surendra Nath Singh against love jihad and drug abuse promoting hookah bars. Some youngsters have vented their frustration and anger by damaging property, let me make it clear, this is just a start, much more action will follow if the hookah bars aren’t closed,” BJP youth wing Bhartiya Janta Yuva Morcha leader Amit Rathore said.

“We arrested Surendra Nath Singh and six others for rioting and other charges in connection with this incident,” police inspector Tarun Bhati said.

All of them were later brought to a local court, which sent them to judicial custody, the police officer said.

In the other case where a restaurant was vandalised by Shiv Sena activists, the police said 10 people have been arrested.

“We have arrested 10 people for rioting and other charges,” inspector Rakesh Shrivastava said.