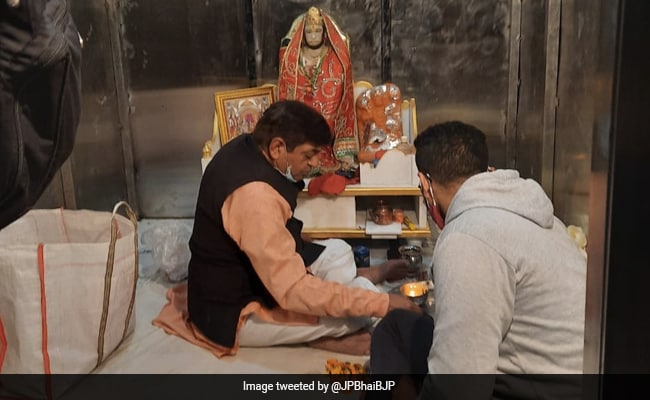 Nearly one-and-a-half-month after a temple was demolished by authorities in old Delhi’s Chandni Chowk, a “makeshift structure” has been erected there, which the mayor of the NDMC on Friday claimed was done by “Hanuman devotees”.

Delhi units of the BJP and the AAP early January had sparred over the demolition of the “old Hanuman temple” as part of the ongoing Chandni Chowk beautification plan.

A senior official of the North Delhi Municipal Corporation (NDMC) had then said the temple was demolished as an “encroachment” under a court order.

Meanwhile, images on Friday surfaced on the social media, of a makeshift steel-made structure having been erected near the site of demolition, and ”puja” being performed with an idol of Lord Hanuman placed inside it.

“The makeshift structure has been erected by bhakts of Ram ji and Hanuman ji. While the due process may not have been followed, we have to respect their ”astha” (religious faith) too,” North Delhi Mayor Jai Prakash said on Friday.

In a tweet on Friday, he shared two photos of the makeshift structure, and said he would visit the site later in the day and seek “Lord Hanuman’s blessings”?

“After visiting the site, I will decide the next step,” the mayor said.

Any civil work in an authorised area needs due permission of relevant authorities. Chandni Chowk, a historic area from the Mughal era, is a dense hub of traders and old havelis, and a prime tourist attraction in the national capital. The area falls under the jurisdiction of the NDMC.

The Chandni Chowk redevelopment project, carried out by the Shahjehanabad Redevelopment Corporation, led by the Delhi government in conjunction with other agencies including the Delhi Metro and the NDMC, seeks to beautify the nearly 1.5-km stretch of the famous street from Red Fort traffic intersection to Fatehpuri Masjid with pedestriansation norms for ease of visitors.