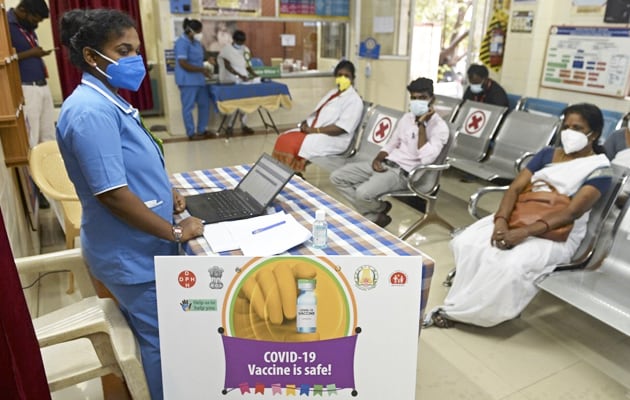 Active coronavirus cases in India increased by 4,421 in 24 hours – a spike of three per cent – to cross the 1.5 lakh mark for the first time in 17 days and register the steepest overall increase since end-November, according to data released Monday morning.

This is the fifth consecutive day in which active cases (calculated as the difference between new cases and recoveries) have increased; 13,506 new cases have been added in this period.

The increase in active cases is also double that recorded this time last week – 1.5 per cent – and a massive 2.9 per cent bigger than two weeks ago, when active cases decreased by 157.

The total number of new cases reported per day have also increased – from a low of 9,121 on February 16 to 14,199 today, with the seven-day moving average increasing by 13.8 per cent.

The centre has warned all five states that continued “adherence to Covid-appropriate behavior” is critical to break the chain of transmission and contain the novel coronavirus.

“Over 74 per cent of active cases are in Kerala and Maharashtra… there has also been a spike in Chhattisgarh and Madhya Pradesh… Punjab and Jammu and Kashmir are also witnessing a surge in daily new cases,” the Health Ministry said Sunday.

In Maharashtra, the worst-affected state, the seven-day moving average of new cases was 5,230 this morning – the highest since 5,576 on December 2. This morning 6,971 new cases were reported in 24 hours – the most since October 24, when 7,347 were detected.

In Kerala, the second worst-affected state, the seven-day moving average of new cases was 4,361 this morning and 4,070 new cases were reported in 24 hours.

In Punjab the weekly positivity rate has increased from 1.4 per cent to 1.6 per cent, while weekly cases in the last four weeks have seen a rise from 1,300 to 1,682.

On Sunday, Maharashtra Chief Minister Uddhav Thackeray said the situation in his state was “serious” and warned of a lockdown if the numbers continued to increase.

Authorities have cautioned against abandoning Covid-appropriate behaviour, including not using face masks or maintaining social distancing while in public, which they say is contributing to the spike.

The spike in Covid numbers in some states comes as 240 new strains of the virus have emerged across the country; Dr Shahshank Joshi, a member of Maharashtra’s Covid Task Force, told NDTV the new strains could be the reason for an increase in cases in the state.

India began its vaccination drive last month and around 1.07 crore people have received at least one shot (of the required two) each. Those vaccinated so far are healthcare and frontline workers.

The plan is to vaccinate around three crore healthcare and frontline workers In the first phase, followed by a critical mass of the population, in the hope that herd immunity can be achieved.

However, “herd immunity” as a defensive concept could be difficult for India because at least 80 per cent of the population needs to have the required antibodies for the whole of the population to be protected, AIIMS chief Dr Randeep Guleria told NDTV on Saturday.

This is a difficult proposition given the number of new strains and that large parts of the country are not following Covid-appropriate behaviour.

“India needs to go back to aggressive measures of testing, contact tracing and isolating,” he said.